The IT sector in Japan continues to expand, however, it is still predicted that in the year 2030, there will be a shortage of IT engineers with 420,000 to 790,000. Recently, the number of companies which recruit foreign IT engineers is increasing. In a competitive situation, they strive to hire talented engineers. But, how is it like to work as an IT engineer in Japan?
We asked 100 Foreign IT Engineers about their experience, their main concerns, what makes them feel supported by their employers, and what kind of companies they want to work for.

Your first job as an IT engineer in Japan starts off exciting. Maybe working in Japan was your dream, but after a few weeks, the downsides of the job start getting to you. GTalent conducted a survey and realized that foreigners found negative aspects of working in Japan that made them consider changing jobs. The most reoccurring ones are shown in the chart below: 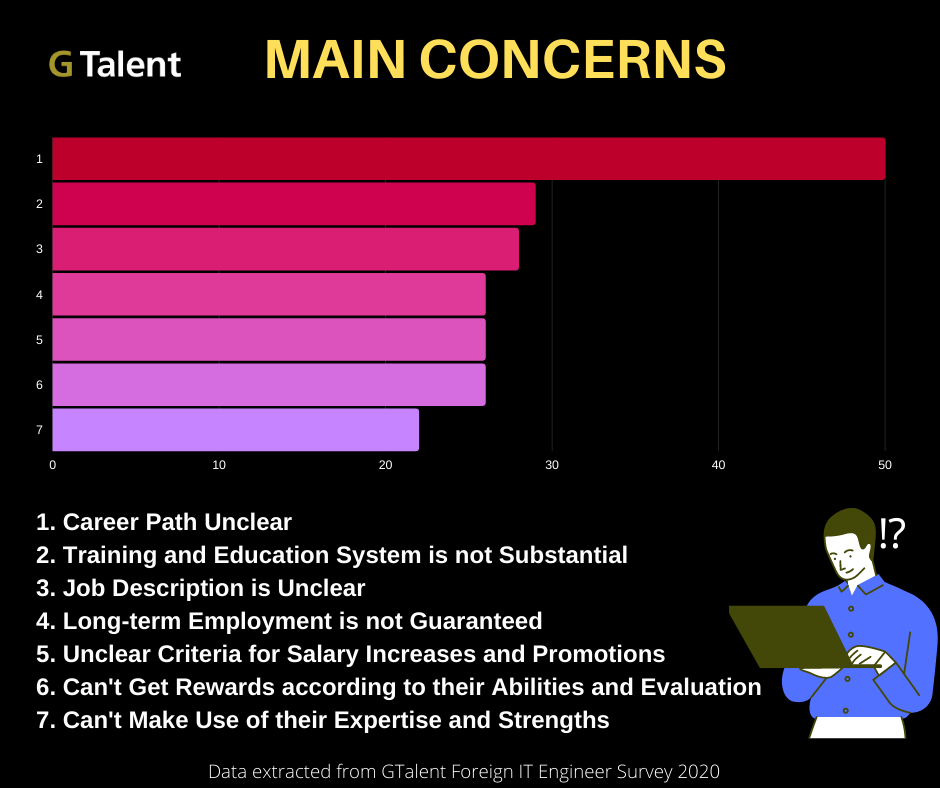 This was the most common concern among IT engineers who are currently working in Japan. This makes them feel unsure about where they are going in life and it’s difficult to set meaningful work goals, also, it is easy to become demotivated and disinterested in the job. By changing jobs to a company that supports your career, you will be able to find motivation and be eager to add value to the company.

Training and Education System is not Substantial

The importance of adequate employee training can severely impact team morale. Strong development and career progression opportunities are considered among the most compelling and yet, seems to be a common concern for IT engineers in Japan who want to work with the latest technology.
The lack of training of IT engineers might lead to poor job performance and increased levels of work-related stress.

Can’t Get Rewards According to their Abilities and Evaluation

A feature of the Japanese pay system is that many companies employ on a “seniority-based system,” whereby salaries are increased in nearly direct proportion to age and the years of service. While this evaluation system has been changing over the years in many Japanese companies, some IT engineers in Japan still face this problem, where their age sometimes plays an important role in salary increases.

What Makes Them Be Satisfied with Their Workplace?

Many companies in Japan want to leverage their foreign employees’ strengths and use their unique perspectives as an advantage. It’s good to keep in mind the positive aspects that motivate foreign employees. 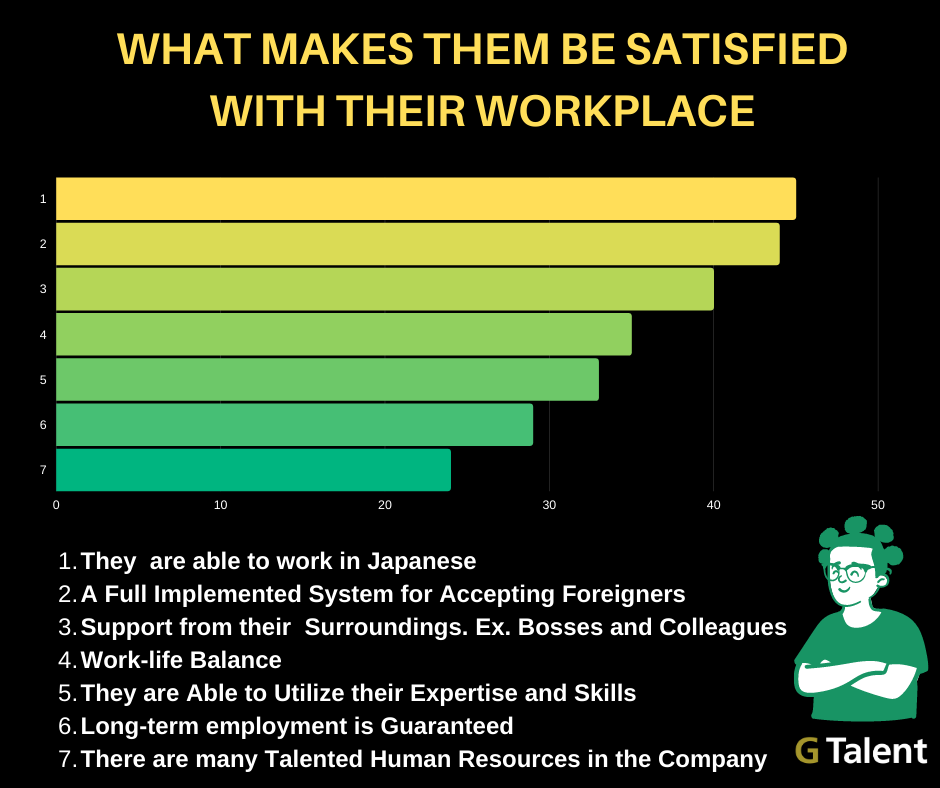 Use of Japanese Language in the Workplace

Many foreigners with Japanese skills prefer to work in a full Japanese environment to improve their language skills. This seems to be an important factor to those who wish to fully immerse in Japanese culture.

Many foreigners prefer to work in an inclusive company, in which Japanese and foreign staff can work in a comfortable environment. This also means that companies need better systems and programs to help foreign workers learn the Japanese language and integrate different cultures into the company smoothly.

Support from their Surroundings

Creating relations that go beyond the working environment is fundamental for many IT engineers in Japan. Of course, communication can be hard, especially at the beginning, since you might not be able to speak Japanese, that’s why many foreigners appreciate the support from their colleagues and bosses.

What is the Most Important Factor for Different Cultures? 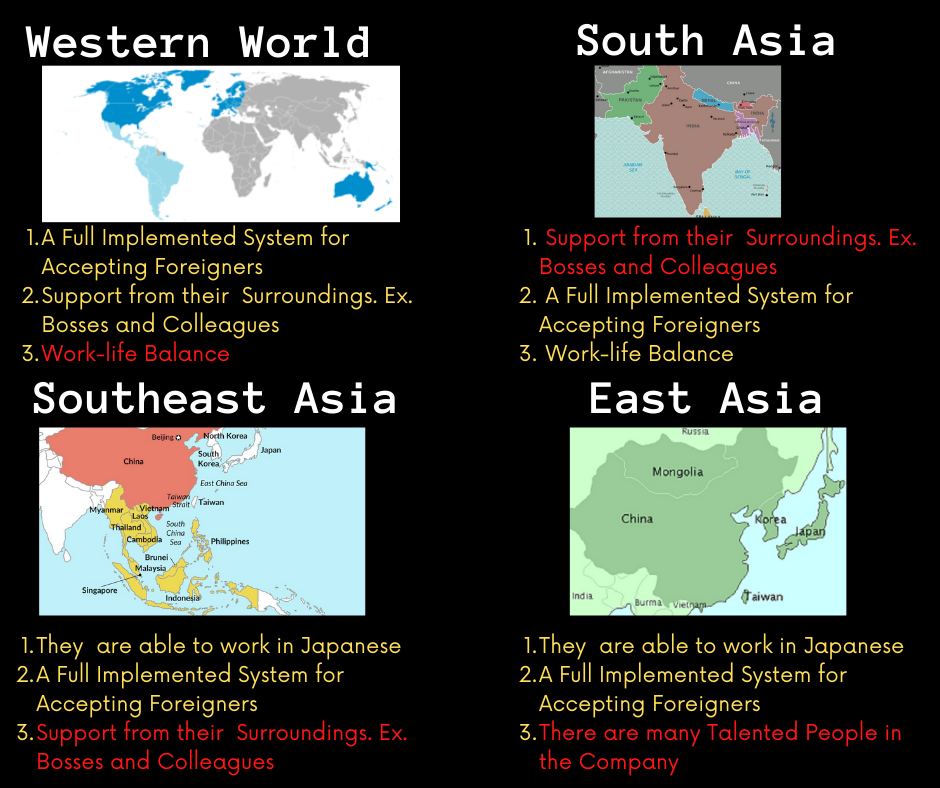 Western Candidates stated that 3 factors were equally important. Comparing with other cultures western candidates emphasized the importance of Work-life Balance.

For South Asian cultures, many candidates considered important the relationship with their colleagues and bosses. It seems that mutual support in the working environment is highly appreciated. o

Southeast Asians made emphasis on wanting to work while using their Japanese language skills. The opportunity to get to blend with the locals and get to know more about Japanese culture through the language is an important reason for choosing a company.

East Asian IT engineers are also looking for a Japanese working environment where they can make use of their Japanese language skills. While they also aim to work on a company that has implemented a system for hiring foreigners, they as well want to work with the best talent. Working with skilled engineers who are experts at their job improves business productivity, which leads to improving workplace relations, as they will be able to get on with the job and work harmoniously with their colleagues.

What Do Japanese Companies Should Do in Order for Foreigners to Play an Active Role? 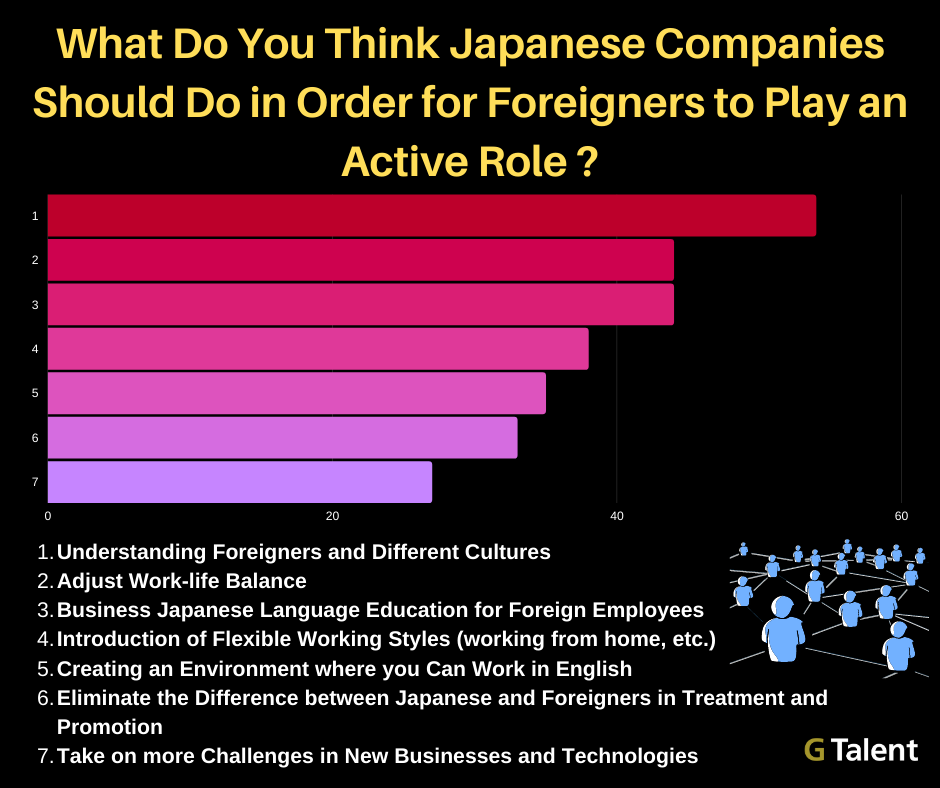 IT engineers from different cultures agreed that Japanese companies should be more open to the international community and take the initiative to promote diversity in the workplace. In addition, they should adjust the work-styles to more flexible ones and improve the Work-life balance.
As we mentioned above, many foreigners are looking forward to getting along with the locals and get to know more about Japanese culture, so a Japanese language education is a benefit that foreign workers would appreciate having.
As for foreign IT engineers, technology is an important aspect to consider when changing jobs, so a company that uses the latest technology and takes new business and technology challenges seems to be more appealing and would attract skilled IT engineers.

Overall, the results of this survey have shown that many foreign IT engineers are looking for more inclusive workplaces. A company that promotes diversity and understands the difference between cultures with an open approach can contribute to creating a better workplace where the employees can thrive and improve productivity.
If you are a foreign IT engineer and you are thinking about changing jobs in Japan, please register to G Talent. G Talent is a recruitment agency specialized in foreign IT engineers, we work with start-ups and large companies that are eager to hire skilled foreign IT talent.